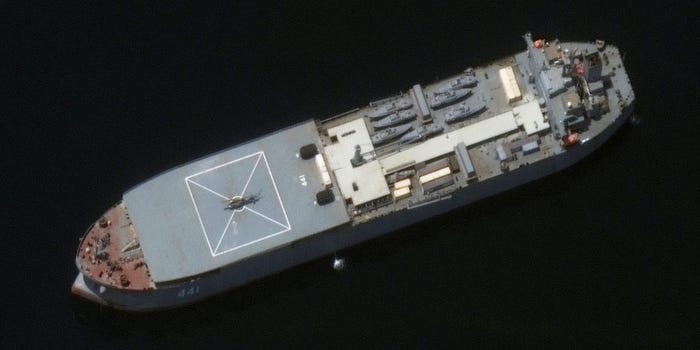 De FaaktoOctober 2, 2021Comments Off on Iran’s Junk Navy, Is A Guerilla Navy & It Serves a Purpose 61k

International sanctions have unquestionably crippled the Islamic State of Iran, causing the nations naval fleet to decline drastically.  Iran cannot generate enough revenue to build new maritime assets and decommission its aged, inadequate vessels.  Tehran does not have enough money to properly train personnel capable of sailing & fighting against an adversary.  The chronic wasting of Iran’s navy has forced it into asymmetrical maritime warfare, using repurposed commercial vessels.   Iran has shifted what resources it can, to retrofit commercial cargo ships into a mediocre and limited naval fleet. Putting more modified ships in the water, allows Iran to claim it has an operational navy, capable of conducting limited warfare.  Using this sort of doctrine, Iran to some degree of success, has managed to build a symbolic ghost fleet that is a force multiplier.  Iran’s refit commercial vessels are part of a working maritime guerrilla force, adequate enough in proxy warfare, grey-zone strategies, and special operations.

Limitations aside, Iran’s junk navy serves a purpose, and there are three important objectives that are making the Islamic States limited navy effective, 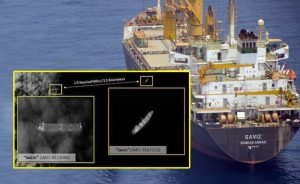 Image of Saviz Courtesy of N12

Iran has refitted the Saviz, a former merchant vessel and deployed it as a spy ship for proxy warfare, special operations, logistics and intelligence gathering. This floating base has been used for years to advise and assist Houthi forces engaged in Yemen’s’ civil war. The Saviz have been a strong performer in Iran’s proxy campaign against Saudi Arabia and United Arab Emirates.  Iran’s support has fueled Houthi gains in central Yemen, battered Saudi reinforced ground forces and fed the chaos needed to prolong the conflict, which is bogging down Saudi Arabia and bleeding it dry. (MIT, 2020) 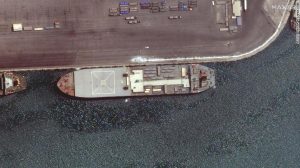 The Makran, although not yet tested, is as capable a mothership as is the Saviz. She is used for intelligence, surveillance and special operations. Makran cleverly, retains its cargo space, and is a flagged naval vessel which cannot be boarded or searched by any sanctioning authority.  The Makrans’ cargo hold, allows Iran to multi-purpose her as a smuggler.  While not able to transport large quantities of material, the Makron allows Iran to thumb its nose at the international community while overtly moving scarce materials and equipment for its nuclear program, unchecked.

Iran’s newest commercial conversion, is the Shahid Roudaki a former roll on roll off cargo ship, recently commissioned by The Islamic Republican Guard.  Tehran jestingly claims, she is a heavy combat, intelligence, and support ship that is a mobile naval city, much similar to a U.S. Navy Expeditionary Sea Base.  The Islamic Guard asserts the Shahid Roudaki is ready to conduct various low key ocean missions with all the necessary equipment and facilities to create a stable maritime domain for the Islamic Republic and regional countries. The Islamic navy boasts the scope of its missions has expanded outside of the Persian Gulf, into the open waters of in the Persian Gulf and the Gulf of Oman and could potentially range as far as the Red Sea.

Iran’s makeshift navy ships; the Saviz, Makron and Shahid Roudaki, provide extraordinary propaganda value to the Islamic nation. Tehran validates it can conduct proxy warfare in Yemen, using Saviz under the cover and protection of a civilian ship.  Makron symbolically establishes that, using post sanction resources Iran can outmaneuver international restrictions and conduct critical smuggling missions. When considering Iran’s Guerrilla navy group, Iran has exhibited it can effectively project a sort of regional power & influence. Iran is showing the international community, it can outfox adversaries by building a junk navy capable of proxy warfare, smuggling operations, and intelligence function; this fully validates that Iran’s junk navy is serving a purpose.

Iran became subject to international sanctions because of the Islamic states’ support for regional armed factions and ambitions to develop nuclear missiles.  Implementation of deliberate U.S. policy, global economic sanctions from 2011-2015 contributed to the shrinking of Iran’s economy as its crude oil exports fell by more than 50% and it could not access its foreign exchange assets abroad. Iran’s compliance with implementation of nuclear program restrictions stipulated by the Joint Comprehensive Plan of Action (JCPOA), the US administration eased the relevant sanctions and U.N. and European Union sanctions were lifted as well. Remaining in place is U.S. sanctions on direct trade with Iran and on Iran’s support for regional armed factions, its human rights abuses, and on its efforts to acquire missile and advanced conventional weapons technology.  (Congressional Research Service, 2021) 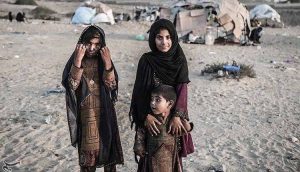 How Did Sanctions Hurt Iran?

Sanctions against Iran have caused significant damage to its economy, 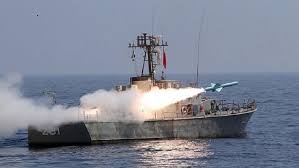 Recently there have been several examples of IRIN & IRGCN poor readiness, training, and security, on its not so-seaworthy vessels……

How is Iran compensating for the Lack of Naval Resources?

Who has Refit What Vessel?

According to an IRIN spokesperson, Makran offers the following capabilities:

Makran as a Smuggler

De Faakto intelligence analysis denotes that Makran may have used its smuggling capability to deliver cargo to Russia as payment for sanctioned goods.  Any number of sanctioned goods could have been transferred back to Iran including conventional weapons and nuclear materials.

De Faakto research also posits that while in Russian port, the Makran was possibly fitted with GPS spoofing equipment by Russian military technicians.  Since leaving St. Petersburg the Makran has been difficult to track and OSINT maritime ship spotters have noticed strange anomalies with Makran positioning; indicating Makrans’ probable new spoofing capabilities.  As Iran has declared intentions to break sanctions by transporting oil to allied nations, the need for AIS spoofing equipment aboard flagged Iranian navy vessels is to be expected.

Where Exactly is the Saviz Located?

The Saviz as a Mother Ship

Islamic Republic Guard Corps Navies’ latest maritime combatant ship is a grey zone, asymmetrical warfare asset called Shahid Roudaki.  She is another converted cargo ship retrofitted to conduct various low key missions, in more distant locations.  The Shahid Roudaki is considered to function as a special warfare and intelligence support ship. What is interesting about the IRGCN vessel is that it is flagged as a navy vessel, and not a commercial vessel covertly operating as a intelligence espionage ship, this means the Shahid Roudaki is not protected under maritime law and is subject to the rules of warfare.  Some sources compare her to an expeditionary support base.  Much like the Saviz, Shahid Roudaki is expected to anchor in international waters outside a foreign coastline and gather intelligence with radar equipment, deploy small boats and function as a drone carrier.  Shahid Roudaki has little in the way of defenses and would not be able to defend herself beyond the light armaments noted on board.  (USNI, 2020)

What Iran Says About the IRGCNs Latest Initiative

What is Iran Saying About the Capabilities of the Shahid Roudaki 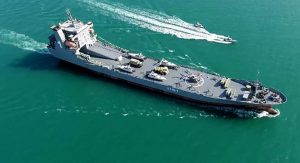 Image of Shahid Roudaki Courtesy of The U.S. Sun

How is Iran Spinning Propaganda Value on Its Latest Navy Refit?

The Islamic state talks about Shahid Roudaki warship and its new capabilities,

Propaganda Aside, What is the Reality of this Ship Operationally? 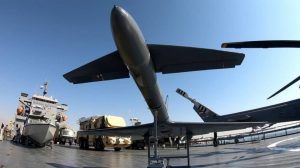 About Shahid Roudaki and Her Specifications

What has the Shahid Roudaki Got on Her Deck?

Iranian Warship Could Be Bringing Millions of Gallons of Fuel to Venezuela-USNI-Sam LaGrone (2021) https://news.usni.org/2021/06/10/iranian-warship-could-be-bringing-millions-of-gallons-of-oil-to-venezuela