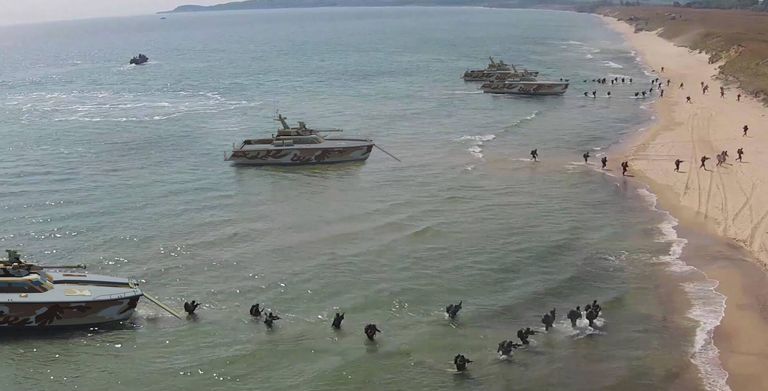 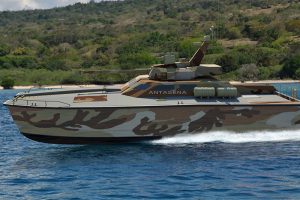 The Tank Boat “Antasena” X-18 is an intelligent & cleaver maritime platform built by North Seas Boats in cooperation with the Indonesian Navy. With proper doctrine and deployment this vessel could prove to be a valuable and innovative multi role naval asset. The hull is a light composite fire resistant material which is 10X stronger and 10X lighter than steel. It has a shallow draft of 3 feet which allows for landing of troops, it is 21 feet wide and 59 feet long, providing a good sized deck for personnel and equipment above and below deck. It is capable of launching a surveillance drone(s), a rigid inflatable boat and jet skis for Special Forces missions.  Tank boat has achieved speeds of 40 knots and demonstrates the impressive range of 600 nautical miles on a single fuel load.  The main armament provides the option of a 30mm cannon, or a heavier rifled 105mm cannon. The Cockerill turret system is interchangeable between both cannons and is reconfigurable within hours. The 105 gun is capable of direct fire missions or can elevate like a mortar for, indirect fire support.  The larger gun is able to deliver Cockerill’ Falarick 105 Gun Launched Anti-Tank Guided Missile (GLATGM) which can destroy targets as far as 5000 meters away. The X-18 will have the option of remote operated gun systems in 50 calibre HMG, or 7.62 calibre GPMG. De Faakto analysis suggests a dismountable mortar plate could be fitted on the rear deck to provide 60mm or 120mm mortar support when extra fire power is required.  The large deck space on the aft of the hull is ideal to serve as a fire base for sniper teams and dismountable crew served weapons.  Utility of the available deck space is only limited by the imagination and the payload.  Research literature speculates a missile version of the X-18 will be developed to carry and fire anti-ship missiles. Tank Boat offers a cost effective platform for maritime combat training.  Smaller militaries and navies might purchase a small number of Tank Boats to use for combined arms training.  Nations that have a navy but no marine infantry can familiarize and cross train conventional infantry units for maritime operations, basic seamanship and survival.  Naval officers can work with land combat elements thereby increasing skills, knowledge, and cooperation, while building relationships. Junior infantry platoon commanders and senior NCOs can develop and broaden leadership skills, creating vision for future deployment of resources. 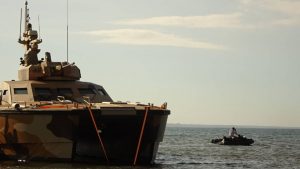 Why is the Tank Boat Suitable for the Indonesian Navy?

Composed of more than 18,000 islands spread over 8 million km² of waters, the Indonesian archipelago is facing a growing threat coming from piracy and its Chinese neighbor. The continuing deterioration of the security situation in the region put forward the need for a fast, heavily weaponized multirole platform which will be capable to conduct reassurance patrolling, small-scale rescue missions, as well as fire support capabilities for amphibious infantry (Naval News, 2021)

India, Greece, the Philippines and the United Arab Emirates have all expressed interest in acquiring Tank Boats, because they work in similar maritime environments 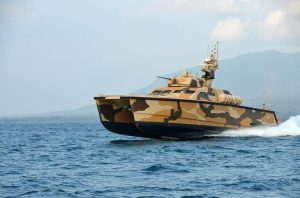 Tank Boat would provide a premium craft for small kinetic strikes and special operations warfare. USN SEALS, Delta Force ODAs, SWCC and MARSOC Marine Raiders could maximize, brown and green water capability using the shallow draft vessel. One of the best assets of tank boats is SOF can rely on their own dedicated fire support when needed or when other forms of close support are unavailable (air cover, naval artillery, heavy machine guns, mortars and drone support).

Tank Boats in the hands of SWCC operators could prove to be a superb asset. With tank boats; SWCC teams can provide a heavy platform firebase for unconventional warfare, infiltration and ex-filtration of platoon size special operations teams. Imagine 1-3 SWCC crews providing maritime over watch in tank boats in a similar fashion as AC 130 gunship do. The extra space provided by the catamaran hull and large deck areas, is useful for other logistical requirements and supports, including command and control, quick reaction forces, and advanced medical surgical.

Tank Boat might be utilized as a platform for clearance divers, maritime survey, navy reconnaissance patrol, and intelligence collection, in regions with vast labyrinths of archipelagos and island chains where opposing forces may choose to hide. Tank Boat with its long range, shallow draft and self sustaining firepower could prove to be a formidable vessel for reconnaissance and intelligence.

Think what X-18 Tank Boat platoons, companies and battalion size squadrons, might look like operating as traditional armored cavalry units might, except on water. Tank boat platoons can be deployed for riverine and island hopping warfare. Infantry supported by heavy machine guns, anti-tank, mortars, cannons and rockets will facilitate landing operations and can provide inland fire missions for troops taking and holding ground. 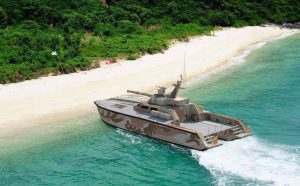 Could the United States Marine Corps Use Tank Boats?

Some naval experts will argue that the Tank Boat concept is not an effective choice for the U.S. Marines. The Marine Corp. is currently reinventing itself so as to operate in the South China Sea, and across island chains such as the Spratlys and Paracels. While a vehicle like Tank Boat sounds like it could be a worthy addition, the Marines would be facing off against the People’s Liberation Army, not pirates or smugglers, and thus require larger ships to carry weapons such as the HIMARS rocket launcher, air defense artillery, and anti-ship missiles. U.S. Marines will also bring their own heavy firepower. Instead of a boat-mounted gun, Marines can call in air strikes with F-35B Joint Strike Fighters, AH-1Z attack helicopters, and 5-inch guns from Navy destroyers. (Popular Mechanics, 2021)  While it is true these assets will provide close combat support for Marines in most instances, there are useful applications for Tank Boat, in the U.S. Navy, Marines and SOF. 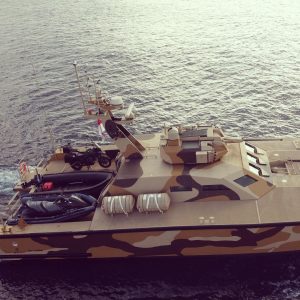 What Do Tank Boat Mission Sets, Capabilities and Tactics Look Like? 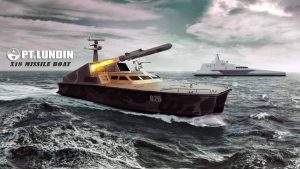 What Types of Weapons Might be Seen on Future Tank Boats, and what are the Capabilities of these Weapons? 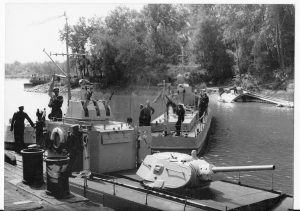 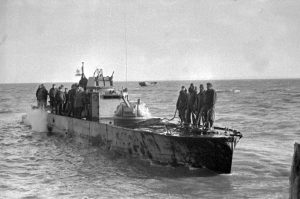 Image of Soviet armored boat of 1124 project of Azov military flotilla at Kerch Courtesy of WIO.RU 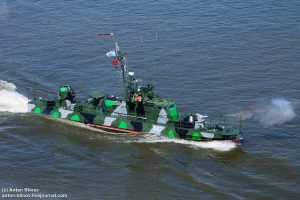 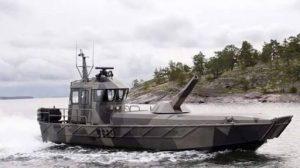 What Exactly is a Tank Boat?

As the name implies, Tank Boat is the definition of the object; a boat with a tank turret mounted on the hull. The Indonesian Navy “Antasena” X-18 prototype vessel, may appear to be a relatively new concept, however it really is not.  Internet research reveals that, from 1935-1945 the Russian navy built 310 “Riverine Tanks” fitted with T-28 & T-34 tank turrets on projects 1124, 1125 & S40. (WIO.RU, No Date)  These tank boats were sometimes referred to in literature as “Gun Boats” or “Artillery Boats.” The Russian Tank Boat was resurrected again after WW2, with Project 1204 Shmel-class artillery gun boats, which were constructed between 1967-1974. The Shmel-class continues to operate in small numbers today. (Military Factory, 2021)  Another boat formed around a similar concept is the “Mortar Boat” operated by Finland and the United Arab Emirates. The Patria NEMO 120mm mortar boat is a small fast narrow vessel with room for 16 troops in minimal gear. (Jalopnik, 2014) There are two secondary armaments, which consist of 50 calibre heavy machine guns. Below decks is very cramped, and there is a small landing ramp on the bow of the vessel, but the vessel does not provide extra capabilities like the launch able Rigid Hull Inflatable Boat (RHIB) or drone support.  The Patria has a nice armoring package but would not be as effective as the X-18 catamaran given comparable tasks. What is different about the X-18 prototype gun boat compared to its earlier predecessors; is the entire system has been designed around a lightweight catamaran hull which is a more stable platform, made from fire resistant composite materials that are stronger then steel.  When fitted with the armored Cockerill turret, the hull and turret combination offer levels of ballistic protection and fire power of modern armored fighting vehicles. While there are other very capable riverine vessels in many navies around the world, the X-18 is built around the tank gun and turret system, and carries secondary and coaxial armaments much like main battle tanks and armored fighting vehicles.

Meat & Potatoes-Basic Specifications of the X-18 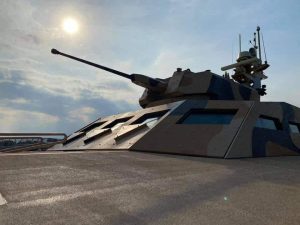 Specifications for the Cockerill 3030 Turret

Crew-2 crew in the manned version 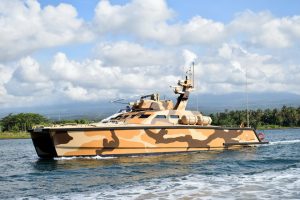 The Patria NEMO ‘Mortar Boat’ Is Small And Fast With A Huge Ass Gun-JALOPNIK-Tyler Rogoway (2014) https://jalopnik.com/the-patria-nemo-mortar-boat-is-small-and-fast-with-a-hu-1666492358